During this last August, I took part in a 2-week-long Humanities Lab. There were eleven of us students from various liberal arts colleges – Wellesley, Haverford, Grinnell, Denison, etc. – divided into two groups, one focusing on mapping Greek mythologies (my group) and the other experimenting with aspects of preforming Greek tragedies. Our projects are hosted on Mapping Classical Mythology, part of Wellesley’s Omeka site and we used the Neatline editor to map them, an extra feature that can be added to Omeka. We started out learning about ancient artifacts, particularly Greek vases, and discussed how to cite these and which metadata to add to Omeka. Since I had little to no background in Greek mythology, I decided to map the Odyssey, one of the most well-known Greek epics and written by Homer. 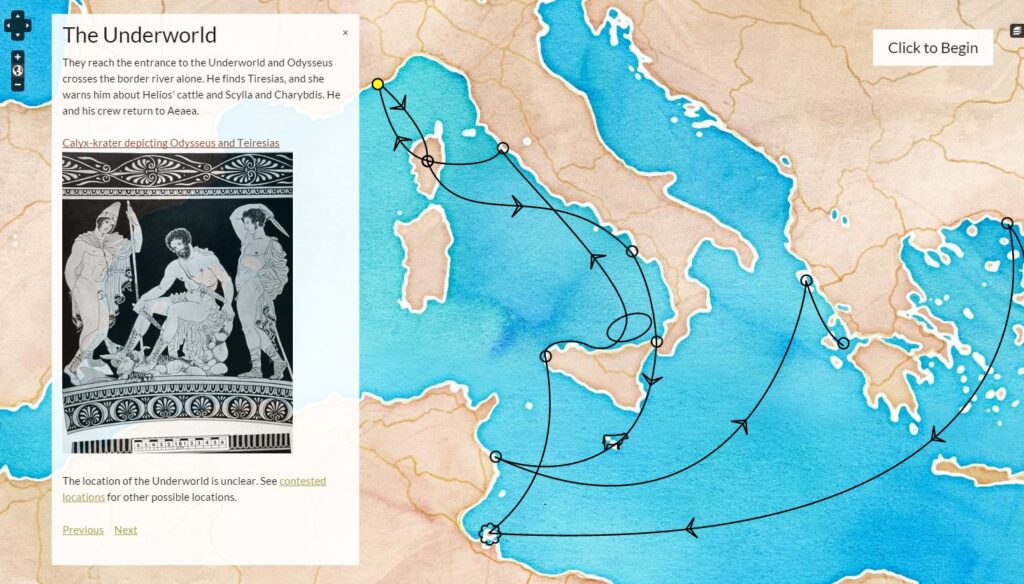 Each map looks drastically different. We all went our separate ways when it came to design, and they all turned out great. I went for a minimalist look, whereas other maps are more realistic:

In conjunction with our maps, we each added an “essay” (a rather loose term) to add additional information and further explanations not covered in our maps. I used mine to provide extra images of ancient Greek artifacts and to discuss contested locations. After all, how do we know these locations existed? While we were delving into museum websites and researching our myths, the other group was busy at work with their masks. They jumped right into the technicalities of how Greek tragedies had been acted out, much of which we no longer know except that they used masks. This group focused on how the actor may have communicated with the audience, particularly depicting emotion through body language.

In my opinion, the Humanities Lab was a success. Both groups experimented with new mediums (in our case, Neatline, and for the other – making masks and reenacting tragedies), simulating a lab-like setting. Given another chance, I would love to participate in another Humanities Lab.