For my Anthropological Thought and Theory class midterm, we were assigned to do a visual midterm. What is a visual midterm you ask? Well, in this particular case, it was a timeline, map and genealogy midterm that aimed to understand the broader arc of the development of anthropology as an academic field through the contexts of time, place and relationships, but in a visual manner.  As soon as I read the requirements for this assignment, I thought about utilizing my digital humanities background to create a really cool project. In the end, there were key successes with these projects, as well as fails (some due to my own procrastination, others just completely out of my control), so with this post, I will take you on my journey of using my job as a DHA in the actual classroom.

First, what exactly was the project asking for? The project needed to consist of three visual elements:

1)    a timeline showing the place in history of each of the authors we  had read so far in class, their works, and—if possible—their fieldwork;

2)    a map showing where the authors are from, and where they did their fieldwork; and

3)    an intellectual genealogy tracing who studied with whom, who positively influenced whom, and who critiqued whom.

The first tool that came to mind was ArcGis. My original project idea was to create a map with different layers, each layer indicating some attribute, such as important anthropology schools, field sites, and birthplaces of each anthropologists I was to include. The idea, then was to create a story map with a timeline component using my previously created map from ArcGIS. I have previously used ArcGis, so I had some experience and knowledge of how to use it, however my plan was unsuccessful.

I realized that the project using ArcGis was going to be more time-consuming that I had anticipated. Before even starting to use ArcGis, I needed to do extensive research on the anthropologists, including finding pictures that I could use for each person, and adding some other important facts. That in it of itself took a some hours of labor, and then inputting them into a coherent set on ArcGis was going to be even more time consuming. Thus, I decided to use different digital tools. I think that, had this project been a partner or three people project, then perhaps I would had continued with my original plan. But as the sole project team member, it was not an impossible task, but rather an impossible task to complete by deadline time (specially given I had another major assignment due a day after.)

One other tool I considered using was palladio. I thought it was a perfect way to do the genealogy tracing portion of the assignment, however, I quickly realized that it was impossible to figure out how to use. Why do you ask? I think this all comes down to the fact that palladio does not have a clear set of instructions on how to use it and format the data we’re supposed to format. If you use the sample data, then it works great. But, then you are left at a lost as to how organize your data from scratch. 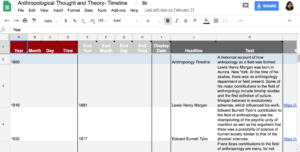 So having abandoned my two original ideas, I was desperate to find another tool. Then I remembered TimelineJS. With TimelineJS, I could satisfy two of my visual midterm requirements: the geneology tracing (by grouping the different schools/thoughts and color coding them) and creating a nice, and succinct timeline (with pictures!) of every anthropologist I was including in my project. The wonderful thing about TimelineJS is that they provide their own template on google sheets for adding data, and it is customizable! So TimelineJS it was! The slightly cumbersome part was just inputting the individual anthropologists data into the template, it was somewhat time-consuming because I had a lot of information to input, but not a difficult task by any means. With every project however, there’s always rooms for mistakes, such as confusing the pictures of two anthropologists when inputting the information, but it’s nothing that cannot be easily fixed. 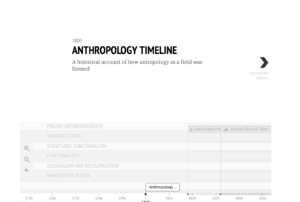 Having figured out my timeline problem, I was still left with another aspect of my project unsolved: I needed a map! And thankfully, Google Maps came to the rescue. By this point, I had all of the data in a nicely organized template (thank you TimelineJS!) so it was easier to simply input the data into a google maps, and create my own map story. I still had to do some modifications to the data, but the process was more straightforward. Google Maps was also easier to use, and I was able to also add the layers of information I originally wanted.

Doing this project taught me a lot of important lessons about digital humanities work, including the importance of being flexible to change and compromise, because often-times tools will either not have all the components you need in a project, or other times, you simply do not have the time to do the project like you envisioned it.

One of the struggles, I think, that we as DHA’s have is the ability to convey what our work is really about and what exactly constitutes Digital Humanities. A lot of people on campus still don’t know what Digital Humanities is, let alone that we have a department here. Many people are often confused when I say I work as a Digital Humanities Associate, and I always have to give a 30-second elevator pitch about what my work entails.  With that in mind, I suggested the idea of having a Digital Humanities social/job fair as a way to expose students on campus to what we do as DHA’s. Every year there’s new students who are hired, so I think this could be a great way to motivate othe 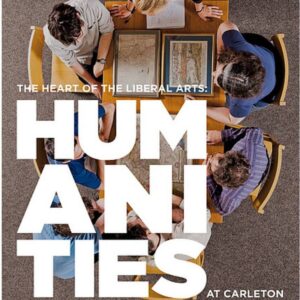 r students to apply to the jobs that may otherwise go unnoticed, or to at least learn what Digital Humanities is all about!

Myself and another of our DHA’s, Tyler, are now in the process of planning the event. However, instead of just focusing on DHA’s, we are also hoping to have students from other digital/tech related jobs at Carleton, such as our very own Digital Scholarship Interns, as well as Academic Technology assistants. We hope that this event will be a mini-job fair and that Carleton students can learn more about our jobs, and perhaps apply to these jobs next year. 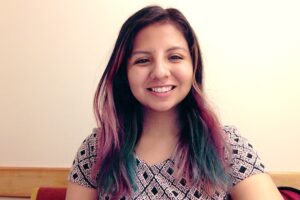 Hello! I’m Ana Yanes Martinez, a sophomore at Carleton College and still waiting for my eureka moment to realize what I want to major. In other words: I don’t know. I was introduced to Digital Humanities in a class I took during the fall of my freshman year, and I became really fascinated with the intersection of the humanities and digital world. Apart from my interest in the digital humanities, I have a passion for art, cultures, food and a semi unhealthy obsession with the Wizarding World of Harry Potter. I am certain my Hogwarts letter was lost or stolen before it reached me.

I think a very important aspect of digital humanities I learned during training is the thought process given to figuring out what platforms and even software are better suited to specific projects. We looked into three different platforms: Omeka, Reason, and WordPress. I think each have distinctive features suited for specific type of projects. Omeka seems better suited for metadata and archiving, whereas WordPress seems to have more theme availability and design flexibility. Reason on the other hand, seems to be  administrator friendly, and so far the easiest to use. This could be the most comfortable to use for people who want a way to display information without having to learn much HTML and CSS or other programming languages. The downside is that Reason is limited in themes and may leave its users wishing for more. Considering the pros and cons of each platform is necessary at the start of each project as it can prevent the need to migrate between platforms halfway through the project and save time in the long run.